"Sarah Palin was a virtual unknown, even in the US, when John McCain picked her as his vice-presidential running mate in August 2008.But after parting ways with McCain, Palin has since become the standard bearer of the Republican Party and the conservative right in the United States.Her opinions are sought after by a highly respected broadcast news organization.Her family life is the subject of much fascination. There have been rumors her daughter and future son-in-law could feature in a reality TV show.With her rising political profile, Sarah Palin has waded into New York City politics and in the process, invented new words. She compares herself to William Shakespeare.She has used her popularity to raise US$1.3 million so far this year for her political action committee, SarahPAC.This fund-raising largess has raised speculation that Sarah Palin could be preparing to run against President Barack Obama in 2012.If she wins, that would indicate the American people have 'refudiated' Barack Obama and chosen conservative values." 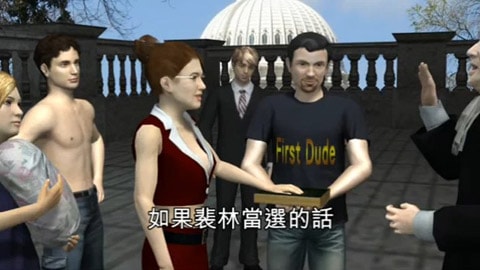 Taiwan's NMA News showcases Sarah Palin's presidential ambitions, her beauty queen past, her moose-hunting habits, and her use of "refudiate" in a new animated news segment. It also features Levi (shirtless, of course).

Somebody needs to make this into a video game.