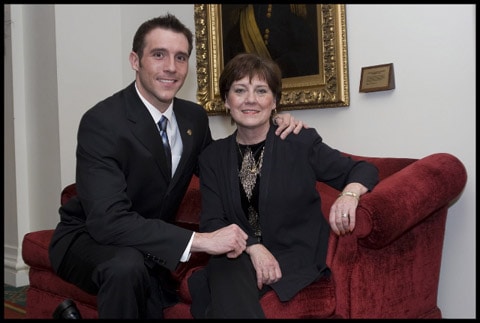 With the Pentagon’s family survey now in the field, Servicemembers Legal Defense Network (SLDN), a national, legal services and policy organization dedicated to ending "Don't Ask, Don't Tell" (DADT), will release a letter each day this week from family members and spouses of former service members impacted by DADT. As the Pentagon reaches out to 150,000 straight couples on how their lives are impacted, these letters will share the perspective of those forced to serve under this law alongside their loved ones. SLDN is urging supporters of repeal to call, write, and schedule in-district meetings with both their senators as the defense budget, which contains the repeal amendment, moves to the floor just weeks from now. www.sldn.org/action.

My name is Nancy Manzella and I have been a mother for 34 years. My husband and I live in rural Western New York where we have made our home at a grape vineyard and have raised three wonderful sons. We now have beautiful daughters-in-law and grandchildren. We are proud to say that we are the all American family. 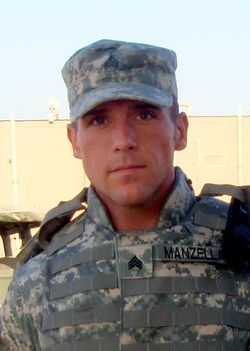 I also was a military mom for six years. Our son, Darren Manzella, served two tours in the Middle East in support of Operation Iraqi Freedom as a Soldier in the United States Army. He was promoted to sergeant, was a team leader of a medical squad, and conducted more than 100 12-hour patrols in the streets of Baghdad, treating wounds and evacuating casualties of sniper fire and roadside bombs.

Darren was awarded the Combat Medical Badge, honoring him for treating American and Iraqi troops while under fire. He saved lives while putting his own in precarious situations by treating gunshot wounds to blast injuries and more. He was “out there” and our family knew he was in constant danger.

As anyone who is familiar with our military knows, service takes tremendous sacrifices, not only for those who serve, but for their loved ones they leave behind. Our family was always concerned for Darren’s safety, as all military families are for their sons and daughters in uniform. We were also concerned for him because he was openly gay while he served his second tour. We knew that anyone in a war zone was at risk of being harmed at any time, but we also understood that because of “Don’t Ask, Don’t Tell,” Darren was especially vulnerable. He could be fired, forced out of the Army, and potentially face harassment and abuse. The stress was incredible.

“Don’t Ask, Don’t Tell” not only affects the gay and lesbian service members’ lives, but also throws their loved ones, friends, and all family members’ lives into a stressful nightmare. We cannot get to them if they need us for support, as they are thousands of miles away. The ban impacts so many lives adversely. It causes unbearable stress on everyone concerned, especially with the constant fear that we may slip up, we might inadvertently “out” them even in a simple letter from home. The “All American Families” who have gay or lesbian service members serving are living with this stress every day.

As parents, this law offends us deeply. It tells us that our gay and lesbian children who are in uniform and putting their lives on the line every day, saving lives, are not good enough to serve their country. The law discriminates against family members, forcing fear and anguish into their lives. Our sons and daughters should be judged on their performance, loyalty to country and bravery, not their sexual orientation.

We need to support all American military families – straight or gay.

Our son was fired under “Don’t Ask, Don’t Tell” and I still believe to this day he would willingly serve his country again if this law ended. I can tell this discharge not only affected his military career, but caused him to question his self-worth. Under the law it doesn’t seem to matter how good you are at your job; how many lives you save or people you support; or how patriotic and dedicated you might be. If you happen to be gay or lesbian, this law says you are somehow “less than.”

The Army teaches honor and integrity and holds those values dear. Despite these values, the Army still isn’t allowed to let our gay and lesbian troops live up to that potential because of “Don’t Ask, Don’t Tell.” Under this law, troops are forced to be dishonest, to put integrity to the side, and to live in the closet – with their families closeted beside them – denying who they are.

They need the opportunity to “Be All That They Can Be.”

I am urging you to support the repeal of this unjust law. The values that we gave our kids, and the values the Army told Darren they believe, are really the values we should strive for. But until this law is gone, those values are undermined by unfairness, discrimination and prejudice. I realize that our country is in the midst of great change having to make many crucial decisions. I also understand that the Administration has “a lot on their plate” right now. I’m an American, too, and have many concerns about our country. But, “Don’t Ask, Don’t Tell” repeal cannot and should not be pushed down the road.