British Prime Minister David Cameron expressed his support for Foreign Secretary William Hague after Hague issued a statement yesterday denying he is gay and brushing off accusations he had an affair with a male aide who recently resigned. 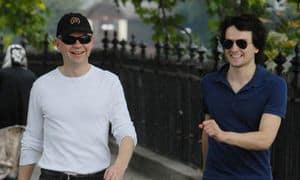 Said Cameron: "We have always given William our 100 per cent support. That was the case yesterday and it is the case today.The prime minister totally understands why William made the statement he did and he backs him 100 per cent."

"Max Clifford said the Foreign Secretary had turned a 'small problem into a huge one' with his denials of an 'improper relationship' with former aide Chris Myers. The tabloid PR guru also said mentioning wife Ffion's miscarriages made him look like he was 'trying too hard' to kill off the rumours. He said: 'The point of PR is to make the situations that you find yourself in better. Before he went public about what was on the internet, most of the British public was totally unaware of these allegations. “Now people are saying, Why is a rich man, a multi-millionaire, sharing a room with another man?' If this young guy turns out to have had sexual relationships in the past it doesn't prove that William Hague is gay but he will be finished.'”