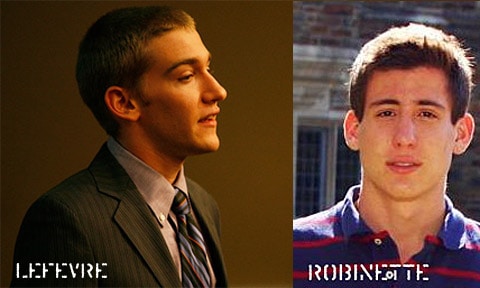 Duke Student Government Mike Lefevre this weekend vetoed a decision by the student senate to de-fund and de-charter the College Republicans at Duke University over the group's treatment of Justin Robinette, the former Chairman of the organization, who was forced out after fellow students found out he was gay, and subsequently subjected to harassment by vandals via anti-gay graffiti and threatening emails from members of the club.

"Lefevre, a senior, vetoed the group’s defunding Friday afternoon and extended his veto Sunday night to block the potential de-chartering of the organization, which would have been determined by the Student Organization Finance Committee. Lefevre’s veto came after he received letters of resignation from DCR Chair Carter Boyle and Vice Chair Travis Rapp, both seniors. 'It didn’t make sense to veto one and not the other,' Lefevre said. 'Students involved in this mess will no longer be leading the organization…. It’s really unjust to the club if we punish them for something that happened last year, [when] the people who did that faced the repercussions.' DCR will hold an election in the next few weeks to select a new chair. No current members of the DCR executive board will be able to run for the position—a decision made by the College Republicans, Lefevre said. After meeting with SOFC Chair Max Tabachnik, Lefevre extended his veto to prevent the organization’s de-chartering. Tabachnik, a senior, proposed that SOFC govern the next College Republicans election. Lefevre noted that the club must comply with SOFC’s ruling."

According to the paper, "The Senate can overturn Lefevre’s veto with a two-thirds vote in its meeting Wednesday."