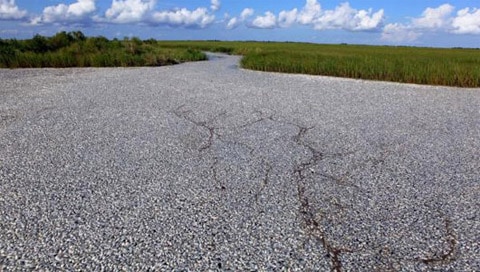 Didn't get a chance to post this last week. It's quite troubling.

Fish kills are apparently common in the Louisiana bayous and are related to low oxygen levels in the water, but this year the numbers of fish dying are unprecedented. In the photo above, dead fish have the appearance of a gravel road they are so great in number.

"Fish kills, when they happen, generally consist of a hundred or so of one particular species. In this kill the numbers are in the millions, consisting of nearly every known species — from crabs and stingrays to eels and myriad fish species. Even a dead sperm whale (from a resident population that was said to have lived near the Macondo Well location) was found in the water. From what my sister says, one of the most common questions being asked in the small communities impacted by the oil spill is, 'How stupid do they think we are?' BP and the government officials who seem to be covering for them would have us believe that the worst of the oil spill is over, but it doesn't take a genius to put two and two together. It will be decades before the marsh ecosystems of Louisiana will truly recover. So let's stop pretending it's not BP's fault."

Three major fish kills have been reported in a week.