Via Joe.My.God comes this bit of stink from Gay Republican group GOProud: 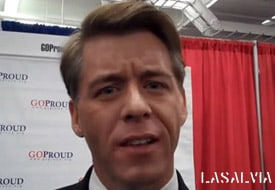 "Today, GOProud, the only national organization representing gay conservatives and their allies, endorsed Republican Sean Bielat in his race to unseat Democrat Barney Frank in Massachusetts’s 4th Congressional District. “If we really want to protect gay jobs we don’t need to pass the Employment Non-Discrimination Act [ENDA], we need to fire Barney Frank,” said Jimmy LaSalvia, Executive Director of GOProud. “From his perch atop the Financial Services committee, Barney Frank was one of the architects of the financial meltdown that cost millions of Americans – including gay and lesbian workers – their jobs. Sean Bielat is a common-sense conservative who supports policies that will grow our economy, create jobs, and improve the lives of all Americans, but especially gay and lesbian Americans.”

"He's a doctrinaire social conservative — a serious Catholic, he wouldn't answer whether he would allow abortion in cases of rape and incest. And he said he opposes not only gay marriage but also civil unions and gays serving openly in the military."

Previous Post: « Watch: Mark Wahlberg Flexes His Muscle for the Fighter
Next Post: Gay Former Christine O’Donnell Aide: She Has a Lesbian Sister »