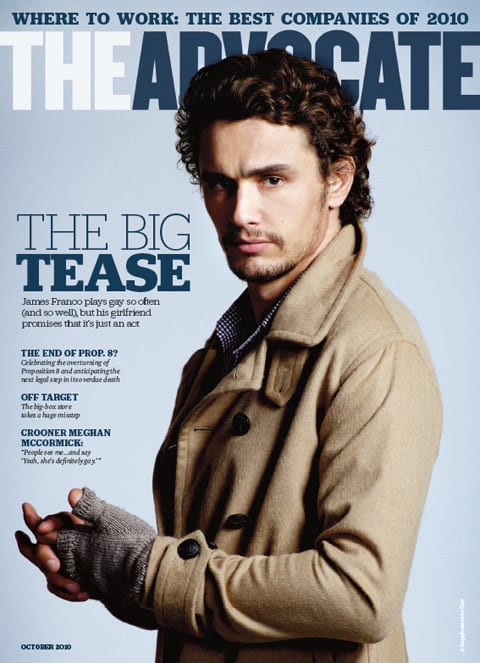 James Franco is about to hit the big screen again in the Allen Ginsberg biopic Howl, and The Advocate talks to him about why he so often plays gay:

Franco tells Benoit Denizet-Lewis it’s because there are just so many straight love stories out there they get boring:

“In this history of cinema, there are so many heterosexual love stories. It’s so hammered, so done. It’s just not that interesting to me. It’s more interesting to me to play roles and relationships that haven’t been portrayed as often.”

Denizet-Lewis also asks Franco about his own sexuality:

“Sure, I’d tell you if I was. I guess the reason I wouldn’t is because I’d be worried that it would hurt my career. I suppose that’s the reason one wouldn’t do that, right? But no, that wouldn’t be something that would deter me. I’m going to do projects that I want to do. Everyone thinks I’m a stoner, and some people think I’m gay because I’ve played these gay roles. That’s what people think, but it’s not true. I don’t smoke pot. I’m not gay…”

Watch a behind-the-scenes mini-doc shot during Franco’s cover shoot, AFTER THE JUMP…