Jason Priest, a GOP candidate for Montana's State legislature, apologized this week for homophobic remarks he left on Facebook, the Billings Gazette reports: 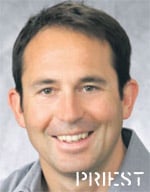 "Jason Priest submitted an open letter of apology to the Carbon County News for remarks he recently placed on an acquaintance’s private Facebook account. In the back and forth of a discussion about the federal stimulus spending and economist John Maynard Keynes, Priest referred to Keynes as a 'big homo' and suggested that President Barack Obama was figuratively, painfully sodomizing America with the American Recovery and Reinvestment Act. 'I offended people with an in-artful and hurtful remark and I apologize for it,' Priest said. In a letter of apology to the Carbon County News, Priest wrote 'recently I posted a comment online that was offensive to some of those who read it. My passion for controlling spending overcame my better judgment and my crude metaphor understandably detracted from the point of my comment. It was a poor choice of words and I apologize to anyone I have offended.'"