A vigorous heterosexual in his widely publicized (not least by himself) private life, he was often cast in roles that drew on a perceived ambiguity: his full-drag impersonation of a female jazz musician in “Some Like It Hot,” a slave who attracts the interest of a Roman senator (Laurence Olivier) in Stanley Kubrick’s “Spartacus” (1960), a man attracted to a mysterious blond (Debbie Reynolds) who turns out to be the reincarnation of his male best friend in Vincente Minnelli’s “Goodbye Charlie” (1964).

Curtis' career fizzled in the late 1960s, after he had already divorced Ms. Leigh, with whom he had two daughters, Jamie and Kelly, and never quite regained its steam, although Curtis did continue to act throughout the decades, including a stint on the late 1970s television show Ca$ino, and the actor successfully remained a Hollywood icon.

For those of you who have never seen the movie, here's a clip from Some Like It Hot, which costarred Marilyn Monroe and Jack Lemmon. Curtis would later say of his time in drag: "I'm telling you, getting dressed as a woman is no easy experience. You can get very intimidated by it." 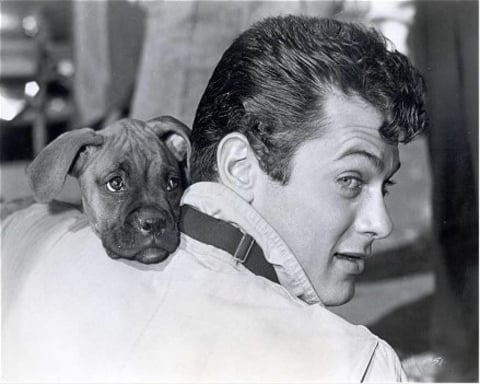 Tony Curtis, the legendary actor who entertained and awed in The Defiant Ones, Houdini and, yes, the cross-dressing comedy romp Some Like It Hot, died at the age of 85 from cardiac arrest at his home near Las Vegas.

Born Bernard Schwartz to Hungarian Jewish immigrants in New York City, Curtis knew that his only ticket to fame and fortune came from his face, a palette of delicate beauty and handsome masculinity.

After fighting in World War II, Curtis moved back to New York, enrolled in acting classes and adopted a new name — Anthony Curtis, which he used for small parts in films such as Francis and Winchester '73, which also starred another bit actor who would become famous, Rock Hudson. Curtis wouldn't officially shorten his stage name until 1950, when he appeared in the Western Stage Coach.

It wasn't until 1951, with the release of The Prince Who Was a Thief and his marriage to another rising star, Janet Leigh, that Curtis' star truly began to shine, and peaked in 1958, when Curtis and Sidney Poitier starred as convicts chained together in The Defiant Ones, a movie that garnered Curtis an Oscar nomination.

Curtis' career continued to soar, bringing the public such hits as Spartacus, The Great Race and Sex and The Single Girl. The most memorable for gay viewers, however, may have been Curtis' turn as a a musician on the run, and in a dress, for Some Like It Hot. As the New York Times notes, Curtis' beauty helped lend itself to an "ambiguity."