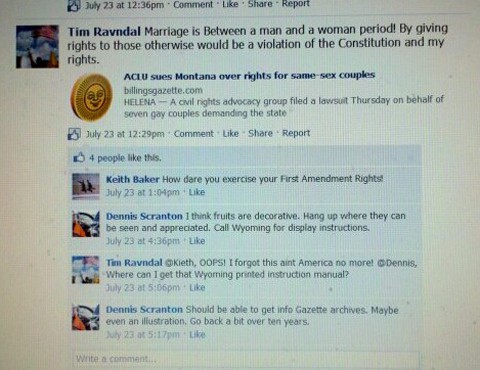 The removal of Tim Ravndal as president of the Big Sky Tea Party Association, following his remarks on Facebook condoning violence against gay people, has caused turmoil within the organization, with some members backing Ravndal and the board chair defending the group's vote to dismiss him. 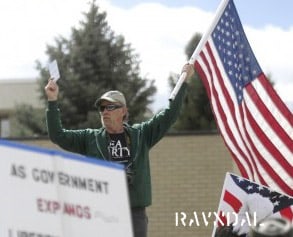 "At a frequently contentious meeting, many of the approximately 30 members in attendence blasted acting board chairman Roger Nummerdor and chairman Jim Walker — absent because he’s hunting in the Crazy Moutains — for stripping Ravndal of his position and membership without giving him a chance to defend himself, and for announcing the move to the press over the Labor Day weekend. In the end, Nummerdor said the available board members would meet soon to consider reinstating Ravndal’s association membership, although he did not specify a date for that meeting."

Board chair Roger Nummerdor described the chain of events:

"Many said Ravndal’s comments were manipulated by liberal and gay-rights groups and the media, and most said the image problem was exacerbated by the quick board action. Nummerdor said he was shocked to read what he saw as out-of-character words from Ravndal, and that he was swamped by calls from media around the country even before the group issued the statement that strongly condemned 'overt bigotry.'…Nummerdor said the Shepard story occured to him as soon as he read about Wyoming and hanging fruits."

Ravndal said that he didn't realize the implications of the Facebook comment he was responding to, describing him as having “a deep hatred of homosexuals.”

Ravndal says he deleted the post as soon as he realized what it meant: "I hit the ‘Remove’ button so quick. I was sickened to look at it…I wish my apology could have been directed to the family of Matthew."

Yesterday, another member of the Tea Party and a GOP candidate for the Montana House, Kristi Allen-Gailusha, declared "war" on the gay community in Ravndal's defense.