Excuse the plot regurgitation but this is just the set up. It's so plotty that the director Will Gluck (Fired Up!) and screenwriter Bert V Royal use an eventually irritating framing device in which Olive is actually telling you the whole story through the wonders of live streaming video.

Olive's "arrangement" with Brandon wins him new-found popularity (blending in!) but dooms her to social ostracism (standing out!); she's now not just not a virgin, but an active floozy.  She just so happens to be reading The Scarlet Letter in class and quickly relates. 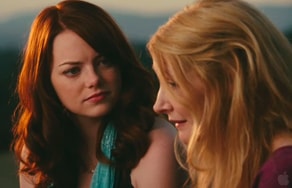 At first it's disheartening to see how quickly the film seems to endorse the belief that a gay teen would be better off blending in — where would the community be now without multiple generations who were willing to stand out? — but the plot and characterizations will eventually redeem this uncomfortable point. And so it goes throughout Easy A, really. It stumbles over itself on more than one occasion on icky plot points and an uneven cast but it's very funny and surprisingly smart. It's too bad that some of the main students are beamed in from a lesser movie (hint: it's the three who look like they're old enough to have finished masters degrees already… not that they look particularly interested in higher learning) but Emma Stone is a born star. She struts through the picture with abundant personality and confidence. Not that she's working alone. She gets hilarious support from Patricia Clarkson and Stanley Tucci as her parents. Thomas Hayden Church and Lisa Kudrow play faculty members and even Amanda Bynes who heads the anti-Olive pack, understands the correct size and comic tone required for her part of the story.

Like a lot of teen comedies this one owes a tremendous debt to past classics of its genre. That's a nice way of saying that it steals from them. Easy A doesn't pretend otherwise though, citing John Hughes movies verbally and indirectly citing other teen girl classics (There's a crazy enjoyable scene with Stone singing and dancing like a madwoman that feels like a direct homage to Elisabeth Shue in Adventures in Babysitting.) You're supposed to credit movies to their director but with no disrespect intended, we'll have to call this Emma Stone's Easy A. See it's a good student of its genre, it blends in. But Emma Stone stands out. She doesn't just fake rock the boys, she rocks the whole movie. Hollywood will undoubtedly be giving her a full scholarship to whichever movie she'd like to enroll in next. 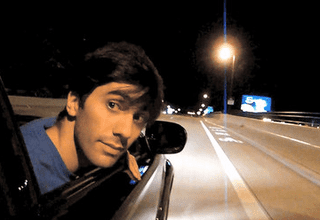 Also Opening: The provocative online relationship documentary CATFISH (pictured right). It's best not to read anything about this one before seeing it. Recommended!; Carey Mulligan, Keira Knightley and Andrew Garfield star in the adaptation of the best-seller NEVER LET ME GO; Strange supernatural forces mess with people in an elevator in DEVIL, which is not directed by M Night Shyamalan though the ads have led people to believe that it is. That's a strange marketing point because nobody likes him anymore; Ben Affleck directs and stars in the crime drama THE TOWN which won very positive notices at Venice and Toronto Film Festivals. The all star cast includes Jon Hamm, Jeremy Renner, Blake Lively and Rebecca Hall. 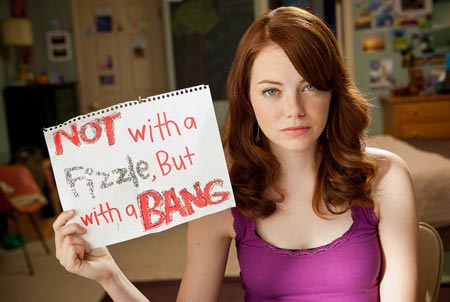 Your Feature Presentation
Is it better to blend in or stand out? It's a question everybody must have asked themselves at some point or another, particularly in the (peer) pressure cooker of high school. Easy A is about a good student named Olive (Emma Stone) who blends in. One day, ashamed of a lame weekend she spent alone at home, she lies to her best friend Rhiannon (Aly Michalka) and makes up a story. The lie quickly escalates as her bestie grills her. Before you can say "George Glass," Olive has not just invented an imaginary beau but she's also lost her virginity to him.

Word gets out. Suddenly Olive is no longer invisible and everyone is seeing her with fresh eyes, including the school's holier than though clique led by Marianne (Amanda Bynes). Thing get really complicated when Olive's gay friend Brandon (Dan Byrd) comes calling. He wants to blend in. Since Olive is standing out, he figures she's high profile cover. 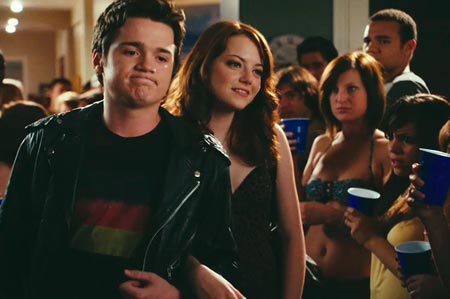