Today on his Facebook page, Russian gay activist Nikolai Alekseev, who was abducted over the weekend by men he believed to be with Russia's secret police, called for protests against Moscow Mayor Yuri Luzhkov: 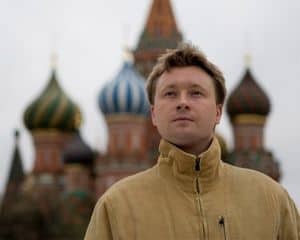 "Tomorrow me and other activists are going for unsanctioned demonstration in front of Moscow City Hall to ask for criminal prosecution of Mayor Luzhkov who is now in Austria with his billioneer wife. The action is at 6 pm on Tuesday in front of City Hall. Protest Luzhkov everywhere you can abroad! It can especially be effective in Austria!!!"

The NYT picks up on Alekseev's story:

"His detention was an effort, Mr. Alekseyev said in a telephone interview on Monday, to press him to drop lawsuits filed with the European Court of Human Rights against the Moscow authorities, with whom he has tussled for years over the ability to hold rallies in the capital…'They let me go, as I understand, because of the noise that was raised over my detainment,' Mr. Alekseyev said. Back in Moscow, Mr. Alekseyev said he still had little idea exactly who was behind his detention. The men never identified themselves, and Moscow’s tight-lipped police force has issued no statements on the matter. Mr. Alekseyev said he and several other people planned to go ahead with a rally outside city hall scheduled for Tuesday to protest, among other things, Mr. Luzhkov’s use of the word 'fags' to describe gay rights activists. The authorities, unsurprisingly, have not granted them permission to do so."