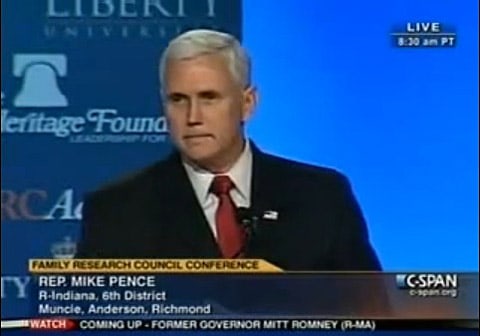 Rep. Mike Pence (R-IN) won the presidential straw poll at the Values Voters Summit this weekend. On Friday, before the poll was taken, Pence gave a speech attacking "Obamacare" and other Democratic measures, as well as repeal of "Don't Ask, Don't Tell". Pence also said "traditional marriage" must be protected.

"Pence, the GOP's Conference Chairman, won 24 percent of the vote, Huckabee 22 percent and Mitt Romney came in a more distant third, taking 13 percent of the vote at the annual conference of social conservatives. Newt Gingrich took 10 percent for fourth place and Sarah Palin came in fifth place with 7 percent., Straw poll participants also cast the most votes for Pence as their Republican vice-presidential pick, giving him 119 votes and Sarah Palin 112. Pence's victory here will offer his presidential hopes a burst of attention. The Hoosier, first elected to the House in 2000, has visited some of the traditional early primary states and is headed back to Iowa to keynote the banquet of a cultural conservative group next month. He faces an easy re-election this fall and, if he doesn't seek the presidency, may run for governor of Indiana in 2012."

Said Pence to "Values Voters": "To those who say that marriage is not relevant to our budget crisis, I say that you would not be able to print enough money in a thousand years to pay for the government that you would need if the family that continues to collapse."

Previous Post: « Scalia: Constitution Does Not Outlaw Bias Over Sexual Orientation
Next Post: Air Force Chief of Staff Norton Schwartz: Implementation will Be Professional ‘If’ DADT is Repealed »