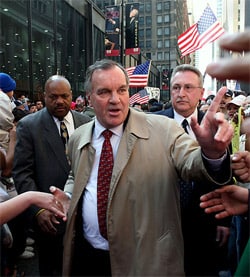 The Chicago Tribune's Clarence Page writes about his tenure, adding this:

"I'll never forget seeing him ride in a pink Cadillac in the North Side's Gay Pride Parade. Surely this was a new day in Chicago politics."

Rex Wockner writes up some reflections of Daley from his time spent as a Chicagoan:

"Daley was pro-gay before it was cool. He was for gay marriage years ago. He redecorated Halsted Street with giant Flash-Gordon-esque retro-futuristic rainbow pylons (photo). He decided long ago that gays make neighborhoods better, and that seemed to be that for him. He never wavered. His spoken defenses of the city's gays were straightforward and from the gut. 'I won't let the homophobes run this city!' Daley said in 1998 when some people objected to the official gayification of Halsted Street. He went on to serve as honorary chair of the capital campaign to get the city's LGBT center built and, in 1996, was honorary co-chair of Gay Games VII. At the Games' opening ceremonies, Daley said: 'Members of the lesbian, gay, bisexual and transgender community have contributed to Chicago in every imaginable way — in business, education, the arts and neighborhood development. They deserve to have the City of Chicago standing on their side, and it will continue to do so, as long as I am mayor of this great city.'"

In 2008, Daley warned of segregating students when plans for an LGBT high school were announced. Said Daley: "You have to look at whether or not you isolate or segregate the children…A holistic approach has always been to have children of all different, you know, backgrounds and everything in schools. When you start isolating children, you say only 50 percent here or 40 percent here…we start doing that, you're going to start isolating and segregating people."

Tom Tunney, a restaurateur and openly gay City Council member, is interested in running for Daley's office, The Advocate reports: