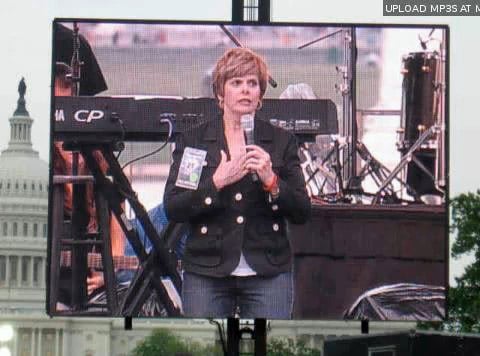 Steve posted about Lou Engle's The Call rally which took place in Sacramento over the weekend. Steve wrote, "The event drew 15,000 people, including Mike Huckabee, who asked God to forgive America for abortions, pornography and, of course, marriage equality."

Also there was Cindy Jacobs, who practically ruptured a blood vessel in a rant against lesbianism.

"This girl-on-girl kissing, Madonna kissing Britney Spears, and what happened to Britney after that and a lot of other things. I know we’re going out over worldwide television. I want to tell you, bisexuality, every kind of perverse thing, the Bible calls this sin. And I want the women of God to kneel down right now and we are going to put a stop to this in our generation and we are going to say 'No More!'"

Listen to the entire vein-popping rant, AFTER THE JUMP…