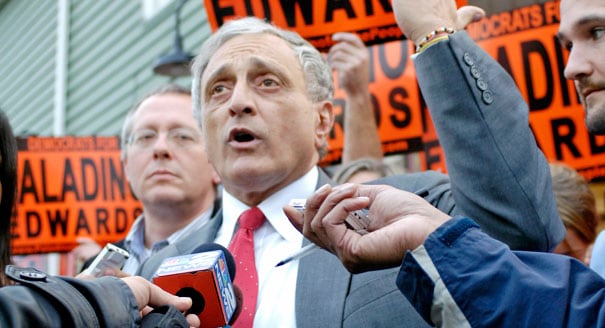 Carl Paladino no doubt wants to put his gay “brainwashing” remark in the past. Unfortunately for him, talking heads couldn’t resist dissecting the New York gubernatorial candidate’s terrible gaffe, and whether Paladino’s comment’s are an isolated incident or part of a larger movement.

MSNBC’s Ed Schultz chatted about the matter with Chris Barron from conservative group GOProud, who insisted Paladino’s opinions are isolated and that he would be “more concerned” if Paladino were a more “legitimate political figure.”

“My dog has a better chance of getting elected,” said Barron, as if everyone were overreacting to Paladino’s comments.

Activist and blogger Michael Rogers then weighed in, and praised Barron for being “consistent” in “throwing Republicans under the bus” when they don’t fit his group’s needs. He went on to insist that homophobia “runs rampant” within the Republican party.

Rachel Maddow helped illuminate that point by comparing Paladino to other Tea Party candidates, like Sharron Angle and Christine O’Donnell, both of whom, yes, have homophobic politics.

Paladino didn’t come out of nowhere, says, Maddow: he’s part of the larger culture war, an idea with which former Bill Clinton adviser Richard Socarides would no doubt agree: he told Keith Olbermann that the “Tea Party” is simply social conservatism in fiscally minded clothing. It’s up to voters to counter these candidates in the ballot box and spread the word: marriage is a “proxy issue” that’s really about gay dignity.

Meanwhile, over at Fox News, Bill O’Reilly argued about Paladino with Ann Coulter, who calls Paladino a “great warrior” for wanting to lower taxes and commended and commended his restraint for not saying homosexuality is a sin, a comment in his prepared remarks. The entire thing, she claims, could help him get votes. O’Reilly disagrees, saying, “Everyone in the world, but you, agrees this ain’t gonna help the guy.”

All this talk about whether Paladino’s an isolated incident or part of a larger trend makes me remember something a New York Tea Party activist said to me about Paladino back in April, when I was working on a story about the state’s Tea Party movement and the candidate was testing the waters: “There are clearly not enough Republicans in NY State to elect him or any other member of the GOP as governor… He is going to have to depend on independent and conservative support to get elected, and independent and conservative is what the Tea Party is.”

Watch videos from these discussions, AFTER THE JUMP…

Previous Post: « GetEqual Protests President From Land, Air And Sea In Miami
Next Post: Ruddy Vargas-Perez In Custody, To Be Arraigned For New York Hate Crime »