The murder trial of a satanist hustler who murdered New York newsman George Weber after they met on Craigslist has ended in a hung jury, the NY Daily News reports: 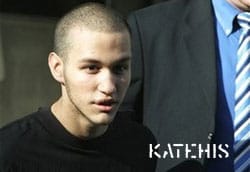 "One lone juror was the holdout, refusing to vote with the 11 others who stood ready to convict 18-year-old John Katehis of murder. The broadcast journalist, 47, went online to hire Katehis, then 16, from craigslist to act out a smothering scene at his Carroll Gardens, Brooklyn, home. Despite the 50 stab wounds Weber suffered, the unidentified female juror holdout 'didn't believe they proved intent,' said fellow juror Darryl Turner, 52, of Cypress Gardens, Brooklyn. 'There was a lot of fighting this morning, but she wouldn't budge,' he said. 'It is what it is.'"