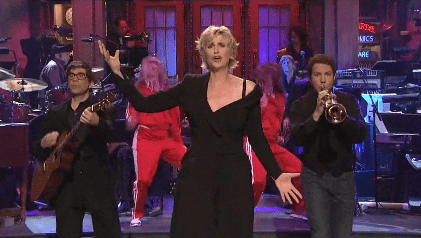 Jane Lynch opened up her outstanding hosting of last night's Saturday Night Live with what she jokingly referred to as a theme song she wrote for Glee.

Said Lynch: "I had the best idea – that I should sing the theme song. But then I was told Glee doesn't have a theme song. so I said, 'why not write one?' And they said 'no.' I took that 'no' as a 'yes.' I took out some sheet music, sharpened some pencils, drank a couple bottles of tequila. I blacked blacked out. When I came to, I had written a song."

Watch her perform the song via her Sue Sylvester persona, AFTER THE JUMP.