President Obama stopped by a meeting held today at the White House with representatives of the Center for American Progress, the Human Rights Campaign, Servicemembers United, the Servicemembers Legal Defense Network, the University of California Santa Barbara's Palm Center, Stonewall Democrats and the Log Cabin Republicans, the Washington Post reports: 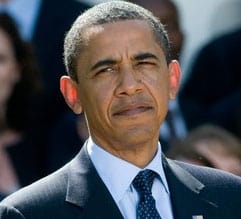 "The president stopped by the meeting 'to directly convey to the participants his personal commitment on this issue,' a senior official said, speaking on condition of anonymity."

There was discussion of DADT elsewhere Tuesday at the White House as well:

White House senior adviser David Axelrod defended the administration's decision to appeal the case during an online video chat Tuesday. 'It is the custom of the U.S. government to appeal laws of Congress that were challenged in lower courts,' Axelrod said during the chat, arranged by the White House. 'It should be by no means read as an abandonment of a commitment, and we intend to keep it.'"

When asked if Obama had reached out to individual Senators in order to change "no" votes to "yes", Gibbs replied:

"To my knowledge, it hasn’t taken place yet.  But, look, the only way we’re going to get something through the Senate is to change the vote count and to move past — look, you got to get — you’re going to have to get past a promised filibuster and — in moving to the bill.  And certainly the only way we can move to that bill is to change some of those votes."

Gibbs also declined to say whether the President would issue a stop-loss order should the legislation fail to pass:

"I think that — look, you’ve seen steps that have been taken over the past several days at the Pentagon involving service secretaries.  You have for — you have a sitting chair of the Joint Chiefs that believes it’s time for this law to end; the President working closely with the Secretary to make that happen. And our efforts in the short term will be focused on the durable repeal of a law that the President thinks is unjust, and that’s where our focus will be."

Press briefing clip, AFTER THE JUMP…