Watch: In Debate, Christine O'Donnell Asks, 'Where In The Constitution Is The Separation Of Church And State?' - Towleroad Gay News 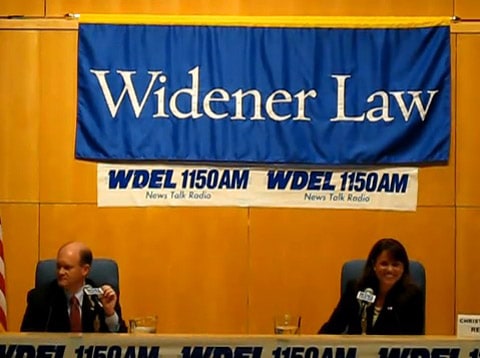 At a Widener Law School debate this morning against her Democratic opponent Chris Coons Delaware Teabagger GOP Senate candidate Christine O'Donnell inspired gasps and laughter from the audience as she appeared not to know that the First Amendment calls for barring the government from establishing religion, the AP reports:

Coons said private and parochial schools are free to teach creationism but that "religious doctrine doesn't belong in our public schools."

"Where in the Constitution is the separation of church and state?" O'Donnell asked him.

Previous Post: « Jail Operations Staff Sergeant: Mississippi Corrections Officer ‘Fired Because He Turned Out to be a Faggot’
Next Post: Ugandan Tabloid Outs 100 ‘Top Homos’, Calls for Their Hanging »