I recently made my way to John Jay Criminal College’s Lloyd Sealy Library in New York City to take a look at the microfilmed court transcripts, most of which are from the early spring of 1903.  The documents are at times amusing in their detail. Here, for example, is an exchange between a prosecutor and one of the undercover police dispatched to the bath house, once located at 55th and Broadway, and one of the city’s man bathhouses at the time.

This exchange illustrates the neurotic specificity Americans had about sexuality, particularly homosexuality, at the dawn of the 20th century, only 107-years ago. Desire and sex had been systematically broken down, rationalized into “good” and “bad,” and picked apart from every angle. Oral sex becomes this: “[He] took the penis of he defendant in his mouth and made indecent motions.”

While cultural evolution allows us to laugh at the prosecutorial analysis, the court’s overall attitude is anything but funny. The judge had no problem voicing his distaste over the case, and wrote in his opinion:

We cannot disguise the fact that any reference to the testimony in the case must necessarily be very unpleasant and disagreeable. It affects the very self respect for ourselves and regard for humanity. It brings to the mind a species of horror to think that any person, any human being endowed with intelligence, with reason, would be guilty of such horrible practices…

Even one of the defense attorneys claimed the details were “revolting:” “The mere statement of the crime charged against the defendant is liable to carry with it a certain revulsion off feelings that may be reasonably entertained by every man who has a decent regard for the proprieties and manliness of his sex.”

The prosecutors were quite persuasive: of the twelve men put on trial, seven received multiple years in prison. There were no protests, no marches to oppose the decision. The men were simply ushered off to jail, victims of early America’s widespread homophobia, and forgotten by history.

Surely we’ve come a long way since the 1903 Ariston Trials. As the Stonewall attack and other homophobic incidents show, however, there’s still more work to be done before the Ariston judge’s 1903 opinion on homosexuality has been eradicated entirely.

Image Note: This is not the Ariston Bathhouse. Rather, it’s another bathhouse, located on Bowery, in the year 1884, less than two decades after the word “homosexual” was first used. 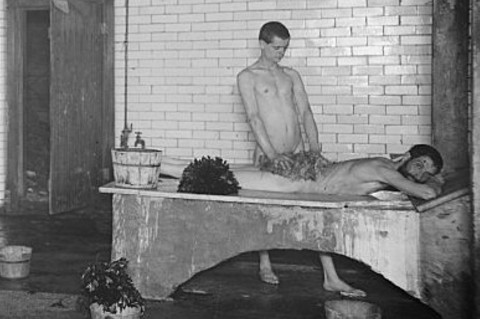 New York City gay bar The Stonewall Inn received a lot of attention this week, after two men attacked one of its patrons. It was an astonishing story, and few could believe something reportedly homophobic could go down at the bar, known as the epicenter for a 1969 revolt against anti-gay police raids. Those protests, of course, helped spark the modern gay right movement, cementing Stonewall’s place in history.

While Stonewall deserves plenty of recognition for its pivotal role as the rebellion’s backdrop, it wasn’t the first New York City establishment to be raided over its patrons’ sexuality. That, um, honor goes toraid the Ariston Bathhouse, where police detained 60 men, and arrested 14, in a February, 21, 1903 sting, all the while referring to suspects as “maude” and “indignant lady.”

The New York Times reported at the time, “[Inspector Brooks said evidence has been gathered for week against the place and that the conduct of some of the frequenters of the establishment was questionable.” Transcripts from the subsequent  trials illuminate the horror and hilarity of homophobia in early New York.