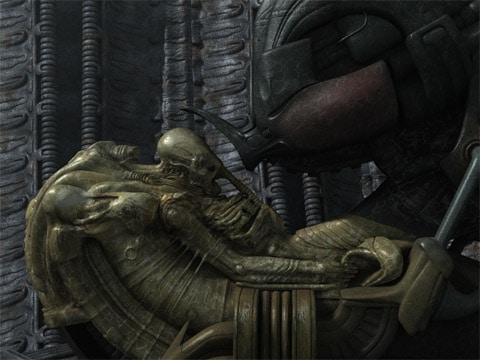 Those of you who are fans of the classic 1979 Ridley Scott film Alien fans may find this report concerning the planned prequel to the film somewhat interesting.

The film site JoBlo reports that 20th Century FOX forced the website What's Playing to remove spoiler details of a script from a write-up it had done on the prequel. They write:

I guess we'll find out if it's true if Fox tells US to take it down? Here are the highlights from the piece:

The script (by John Spaihts and recently rewritten by Damon Lindelof) tells of the space jockeys traveling from planet to planet and terraforming them. The space jockeys are holding captive of two human slave farmers named Fin and Karik and force them (via mind control) to engage in sexual activity. (The twist: they're both male).

The aliens are used by the space jockeys (known as "Growers" in the script) in their terraforming processes as some sort of biological tools. The signature alien won't appear until the latter half of the film when it fully develops into it (this hints that we'll be seeing different and new forms of aliens).

Ridley has met with Lance Henriksen to appear in the film.

So yes, the terraforming thing sounds like a legitimate plot point, but the way the gay slave sex is framed is something out of a black comedy. The Growers don't understand the concept of human gender apparently, so they try to make the two humans mate and reproduce even though they're both male.

They also provide a screenshot of the What's Playing story before it was removed.