Yesterday I posted the hideous segment from KETK, an NBC affiliate in Tyler, Texas, which re-aired a segment from KTBB radio surveying listeners about whether gays were destroying America. Listen to it HERE. 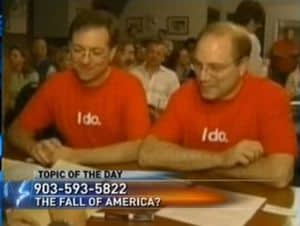 KTBB radio posted this apology on its site today:

The Talkback question that aired on KTBB Radio and was simulcast on KETK NBC 56 television in Tyler on Wednesday, October 27 was unfortunate in its wording and unfortunate in the perception that it created among a large number of thoughtful individuals. The question, “Will the acceptance of homosexuality lead to the fall of America?” is poorly worded at best and inappropriate altogether at worst. For that, we apologize.

There are many issues surrounding homosexuality that are fair game for discussion in the media and in opinion journalism. The proper role, if any, for openly gay individuals in the military, the legitimacy of same-sex marriages and the public behavior by some individuals at gay and lesbian events held outdoors in public view are among topics about which reasonable people may disagree. These and other topics surrounding homosexuality are topics that talk radio hosts and opinion journalists may legitimately pose to their respective audiences.

With that said, the way our Talkback question was posed might be seen as asking, “Do homosexuals, by their very existence, threaten to bring down America?” We believe that such a question, posed in such a manner, is likely to generate more heat than light.

I understand how those who either heard, or heard about, KTBB’s Talkback question on Wednesday might have been offended. For the offense that was taken, we sincerely apologize.

GLAAD also followed up with the station, which is attempting to make amends in various ways. KETK has removed the piece form its website, and will also air an upcoming interview with Fort Worth City Councilman Joel Burns, who has become something of an anti-bullying icon in Texas and around the country after his statement to the City Council in Fort Worth. KETK General Manager Dave Tillery is considering appearing on-air to apologize, and the station is rethinking how they repackage the KTBB content.