Far-right nationalist groups who were behind the violence during Belgrade's recent gay pride march rioted at a football match on Tuesday: 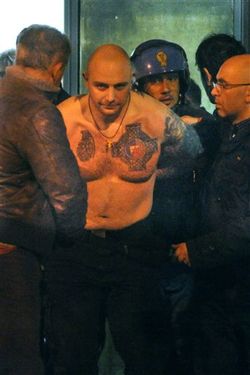 "An Italy-Serbia European championship qualifier game was abandoned Tuesday in Italy when Serbia fans threw flares and fireworks onto the pitch, burned a flag and broke barriers. The Serbian fan groups are known to be infiltrated by neo-Nazis and other extremists with a staunch anti-Western agenda. The rise of the extremism in Serbia is attributed to the economic crisis and a lack of jobs in the wake of the Balkan wars in the 1990s."

Some outlets reported that the riots were spurred by police protection of last weekend's gay pride march, at which more than 100 were injured, including many police officers.

The AP adds: "Police found the alleged instigator of the riot in the trunk of a bus that was due to take the Serbian fans home from the European Championships qualifier. While his face was covered by a mask during the violence, police identified him by his tattooed arms and found explosives material with him. Of the 17 people detained, 16 are Serbian fans and one is Italian, Genoa police official Sebastiano Salvo told The Associated Press. Salvo identified the ringleader as 30-year-old Ivan Bogdanov, who climbed onto a barrier separating fans from the field, used a wire cutter to slice apart a mesh fence and launched fireworks onto the field."

Watch video of the riots, AFTER THE JUMP…