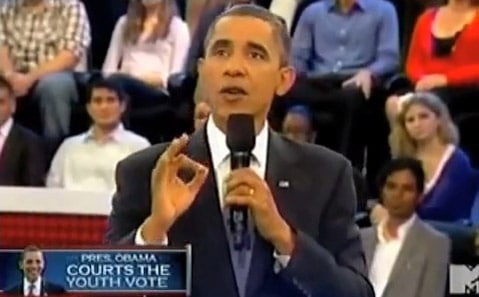 At an MTV Town Hall with young people this afternoon, Obama faced a number of questions on LGBT issues.

One question dealt with online harassment, and bullying (transcript via the White House):

Q    Hello, my name is Allie Vonparis (ph).  I’m a junior at University of Maryland in College Park and also — this is more of a personal question — but I’m also a victim of anonymous, hurtful, degrading harassment over the Internet.  Police and university officials have been unable to help put a stop to it.  My question to you is, what can you do, if anything, to put a stop to these vicious attacks over the Internet while preserving our rights to freedom of speech?  I also ask this in light of the recent — the tragic deaths recently on the news of young people who are bullied and harassed online.  Thank you.

THE PRESIDENT:  Well, it’s a great question.  And obviously our heart breaks when we read about what happened at Rutgers, when we read about some of these other young people who are doing nothing to deserve the kind of harassment and bullying that just completely gets out of hand.

And so we actually, the Department of Education, has initiated a — we had a summit a couple of weeks ago just to talk about this issue:  How can we help local and state officials set up structures where young people feel safe, where there’s a trigger that goes off when this kind of bullying starts taking place so that immediately school officials can nip it at the bud?  So there are a range of cooperative efforts that we can initiate.

And I think that making sure that every institution, whether it’s our schools, our government, our places of work, take these issues seriously and know that in some cases there are laws against this kind of harassment and that prosecutions will take place when somebody violates those laws.  Sending that message of seriousness is something that I think we all have to do.

Now, the last point I would make is that the law is a powerful thing but the law doesn’t always change what’s in people’s hearts.  And so all of us have an obligation to think about how we’re treating other people.  And what we may think is funny or cute may end up being powerfully hurtful.  And I’ve got two daughters, 12 and nine, and Michelle and I spend a lot of time talking to them about putting themselves in other people’s shoes and seeing through other people’s eyes.  And if somebody is different from you, that’s not something you criticize, that’s something that you appreciate.

And so I think there’s also a values component to this that all of us have to be in a serious conversation about.  Because ultimately peer pressure can lead people to bully, but peer pressure can also say bullying is not acceptable.

Another question, via Twitter, asked "Dear President Obama, do you think being gay or trans is a choice?"

"I am not obviously — I don't profess to be an expert. This is a layperson's opinion. But I don't think it's a choice. I think people are born with a certain makeup, and we're all children of God. We don't make determinations about who we love. And that's why I think that discrimination on the basis of sexual orientation is wrong."

White House senior adviser Valerie Jarrett apologized earlier today for language she used in a Washington Post interview which referred to being gay as a "lifestyle choice".

Q    I voted for you in the last elections based on your alleged commitment to equality for all Americans, gay and straight, and I wanted to know where you stood on “don’t ask, don’t tell.”  I know that you’ve mentioned that you want the Senate to repeal it before you do it yourself.  My question is you as the President can sort of have an executive order that ends it once and for all, as Harry — as Truman did for the integration of the military in ‘48.  So I wonder why don’t you do that if this is a policy that you’re committed to ending.

Point number two, the difference between my position right now and Harry Truman’s was that Congress explicitly passed a law that took away the power of the executive branch to end this policy unilaterally.  So this is not a situation in which with a stroke of a pen I can simply end the policy.

Now, having said that, what I have been able to do is for the first time get the Chairman of the Joint Chiefs of Staff, Mike Mullen, to say he thinks the policy should end.  The Secretary of Defense has said he recognizes that the policy needs to change.  And we, I believe, have enough votes in the Senate to go ahead and remove this constraint on me, as the House has already done, so that I can go ahead and end it.

Now, we recently had a Supreme Court — a district court case that said, “don’t ask, don’t tell” is unconstitutional.  I agree with the basic principle that anybody who wants to serve in our armed forces and make sacrifices on our behalf, on behalf of our national security, anybody should be able to serve.  And they shouldn’t have to lie about who they are in order to serve.

And so we are moving in the direction of ending this policy.  It has to be done in a way that is orderly, because we are involved in a war right now.  But this is not a question of whether the policy will end.  This policy will end and it will end on my watch.  But I do have an obligation to make sure that I am following some of the rules.  I can’t simply ignore laws that are out there.  I’ve got to work to make sure that they are changed.

Video on DADT question, AFTER THE JUMP…