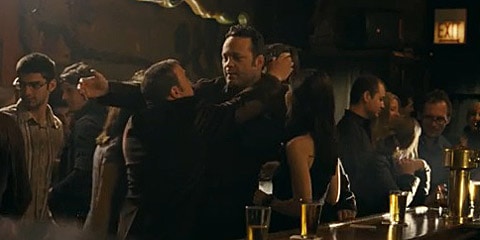 In late September, I posted the trailer to the Vince Vaughn/Kevin James film The Dilemma, which opened with an off-putting "electric cars are gay" joke, and after a reference from CNN's Anderson Cooper (and an up-till-then ignored request from GLAAD) the trailer was edited. GLAAD requested the joke be edited out of the film as well.

"Let me add my voice of support to the people outraged by the bullying and persecution of people for their differences, whatever those differences may be. Comedy and joking about our differences breaks tension and brings us together. Drawing dividing lines over what we can and cannot joke about does exactly that; it divides us. Most importantly, where does it stop?"

The problem is that Vaughn can't join the outrage over anti-gay bullying while contributing to (and collecting a paycheck for) the derogatory dialogue which to some makes that bullying permissible.

“Jokes can bring people together, but they can also push us apart," said GLAAD President Jarrett Barrios. "When 'gay' is used as a pejorative, it frequently sends a message – particularly to youth and their bullies – that being gay is wrong and something to laugh at. We invite Vince Vaughn to work with us and help ensure that gay youth and those perceived to be gay aren't put in harm's way by such jokes.”