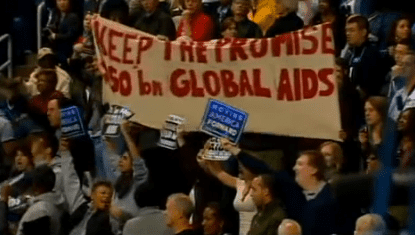 Remember this? And this? Well it happened again yesterday, this time in Bridgeport, Connecticut where President Obama was in town to deliver a speech at the Democratic National Committee "Moving America Forward" rally. The group of  protesters erupted in a chant of “Fund global AIDS! Fund global AIDS!”

“Let me just say this — these folks have been — you’ve been appearing at every rally we’ve been doing,” Obama said. “And we’re funding global AIDS. And the other side is not. So I don't know why you think this is a useful strategy to take.” “I think it would make a lot more sense for you guys to go to the folks who aren’t interested in funding global AIDS and chant at that rally, because we’re trying to focus on figuring out how to finance the things that you want financed, all right?

After a few minutes, the protesters were escorted out of the rally by police. Watch video of the incident, wherein Obama seems to get more than just a little annoyed by the interruption, AFTER THE JUMP.