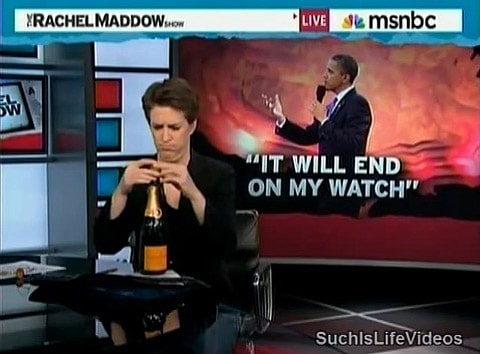 Rachel Maddow breaks out a bottle of bubbly over THIS memo from the Air Force saying that enforcement of "Don't Ask, Don't Tell" would be suspended, but the celebration is cut very short when she realizes there's much more confusion on this issue than answers, considering that the Department of Justice is planning to appeal the ruling overturning it.

The Pentagon later confirmed the original memo to SLDN, writing:

"Earlier today, the Staff Judge Advocate Generals from the Military Services, in consultation with the OSD Office of General Counsel, sent to their Service Staff Judge Advocate counterparts in the field an e-mail informing them of the ruling by Judge Virginia Phillips of the Central District of California, issuing an injunction barring the enforcement or application of 10 USC 654, commonly known as the "Don't Ask, Don't Tell" statute. The e-mail noted that the US Government is contemplating whether to appeal and to seek a stay of the injunction. The Department of Defense will of course obey the law, and the e-mail noted that, in the meantime, the Department will abide by the terms in the court's ruling, effective as of the time and date of the ruling. We have no further information or comment at this time, but when and if we do, we will provide that to you."

So, pending an appeal, the military has halted all discharges under DADT.

Watch Maddow's analysis of a very strange day for DADT, AFTER THE JUMP…