Constance McMillen speaks to the AP about teen suicide and also reveals that she was never a victim of bullying until after she fought her school district's decision to prohibit her form bringing her girlfriend to the prom. 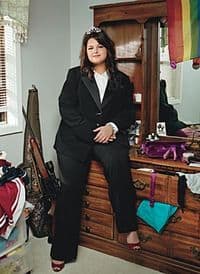 McMillen, 18, said she became emotional after reading about the suicides of 13-year-old Seth Walsh, of California, who hanged himself outside his home after enduring taunts from classmates, and of Tyler Clementi, an 18-year-old Rutgers University freshman who killed himself after his sexual encounter was secretly streamed online.

"I read it on Facebook. I was so upset about this that I could not sleep," McMillen said. "I knew it had to be terrible for them to choose death as a way to escape what they were living in."

McMillen said she has had her own suicidal thoughts. "But I never really considered it to the point where I almost did it," she said. "Everybody thinks about it when times get hard."

Growing up in the small town of Fulton, Miss., McMillen said she wasn't bullied until school officials canceled the prom rather than allow McMillen and her girlfriend to attend as a couple. "I went through a lot of harassment and bullying after the lawsuit, and I realized how bad it felt being in that position," she said.

McMillen has also been named one of Glamour magazine's "Women of the Year" for 2010. In that article, Melissa Etheridge expressed her own pride for McMillen: “She stood up and said, ‘This is who I am.’ When someone does that, it changes the world. It gives hope.”