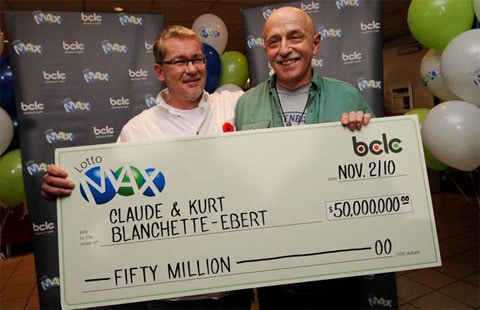 Claude and Kurt Blanchette-Ebert were considering buying a used car for their 30th anniversary when things took a dramatic turn:

The couple was facing tough financial times when Kurt bought a Quick Pick ticket last Thursday from the Mac’s convenience store at Hemlock and Broadway in Vancouver.

When he returned on Saturday to check the numbers at the store’s machine, he was flabbergasted. He rubbed his eyes and looked again: he had matched all seven winning numbers and won $50 million, the biggest lottery jackpot in B.C.’s history.

“The first thing I said was ‘holy sh–,’” Kurt, 63, said as he and Claude accepted their winning cheque from the B.C. Lottery Corp. on Tuesday.

He still didn’t believe it and had the ticket verified by Mac’s clerk Sunil Arora. When he got home, he was “beet red,” said Claude. “I thought he was going to have a stroke.”

The pair stashed the ticket away in a safe place and broke into hysterical laughter.

It's nice to know that the lottery does not discriminate!

Watch a video of the couple here.