Justice White would have had none of the Republican badmouthing of government. He was, in Ken Starr's words, probably the last believer in the New Deal. And, he's right. Justice White never wavered from his earnest belief in government's ability — and mandate — to make life better for the people. He was a talisman for the constitutional revolution fought and won by the Progressives and the New Dealers. He would have seen no constitutional issue with health care reform and, quite likely, a public option.

He would have hated the Citizens United decision, the campaign finance debacle that had its fingers all over the 2010 midterms. In a famous opinion in Red Lion Broadcasting v. FCC, Justice White had the chance to consider the role of the FCC in mediating fairness, i.e., the FCC rule that required broadcasters to air political views contrary to their own. In the face of arguments about censorship and an end to news coverage, Justice White said that the FCC "was more than a traffic policeman concerned with the technical aspects of broadcasting and it … [did not] transgress the First Amendment in interesting itself in … the kinds of programs broadcast by licensees." In other words, the FCC wasn't a guy in a reflective jumpsuit waving his arms at the corner of 34th Street and 7th Avenue; the Commission was a Magneto-like magician who could use his unique expertise to create order where there appeared to be none. Government can be the expert and that was why we needed an FCC, an FAA, an EPA, an FDA and so on.

So, Justice White would have had little sympathy for the rhetoric of the Tea Party. Sure, deficits are generally bad, high taxes are bad in a recession, we get that. But Justice White would have found vitriol for the stimulus irrational and wrong, and he would have found the anger and hate resonating from Tea Party rallies to be shocking and an affront to his gentlemanly sense of order. He may not have liked rapid change in social mores and would likely never ally himself with leaders like Speaker Pelosi and Congressman Frank, but I think he would have voted Democratic in any race that pitted a Democrat against a Tea Party-influenced Republican

It may have been that "lowercase c" conservatism – his personal shyness, his distaste for anarchy — that put him to the right of the so-called "rights revolution" of the Warren Court. Rescuing government from an anachronistic judiciary (the New Dealer in him) was one thing, but forcing government to favor some people over the other (the conservative in him) was beyond the pale. He would have continued to support state restrictions on abortion rights and likely would have disliked cases like Perry v. Schwarzenegger and Log Cabin Republicans v. United States. And for this, I would disagree with him, but I would not lose respect for him.

Justice White's jurisprudence can be explained by recognizing the differences between government rights and individual rights, and his often negative reviews from the left stem from the fact that the progressive movement kept moving, he stood still. That wasn't an intellectual failing, it was an honest reflection of his respect for our system of government and the judiciary. 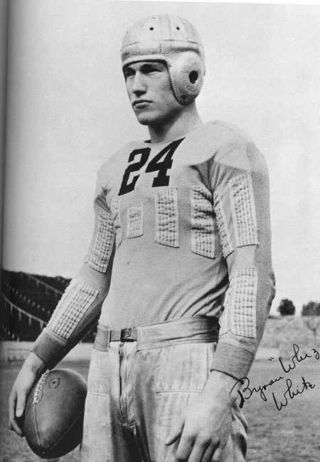 Byron White — Supreme Court Justice, Oxford scholar, Yale Law grad, Navy man, All-American halfback and the NFL's leading rusher in 1938 and 1940 — has always been one of my favorite historical figures. He had the brains and athletic prowess of ten real men, or the intelligence and athleticism of twenty Ari's. His gridiron nickname was "Whizzer", he turned down being the NFL's highest paid player to study at Oxford, he was a Colorado man at a school full of legacies and Easterners. He's just fascinating. So, today, I found myself wondering: What would Justice White make of yesterday's election?

Progressive legal scholars have given Justice White mixed grades (though he has always been a paradigm of so-called judicial moderation, whatever that is) because his role in the rights revolution of the 60s and 70s was, well, mixed. President Kennedy appointed him in 1962 and he remained on the Court until 1993, when he was replaced by the inimitable Ruth Bader Ginsburg. In that time, he opposed abortion, but supported desegregation; he struck down sex discrimination but he declined to join liberal majorities in defendant rights cases and in cases like Miranda v. Arizona. He wrote the majority opinion in Bowers v. Hardwick, putting the gay rights movement in reverse. How could I like him?

Well, he's a fascinating historical figure – a liberal of the 1940s who stood pat when liberalism passed him by; a truly well-rounded man who valued scholarship over athletics, but saw his physical health as part of who he was; a lowercase c "conservative" by the 70s and 80s who found Chief Justice Warren not his type — "I wasn't really in his circle" — and joked that Chief Justice Burger assigned him opinions just because Burger assumed White would write them better. He also replaced a guy — Justice Whittaker — who resigned from the Court after having a nervous breakdown caused by the intellectual rigors of being a judge.

I often wonder, what would Justice White think? So, today, while our much more capable political pundits talk politics, I will geek out and wonder what Justice White would think of yesterday's election. This little exercise will show that our allies in an election need not only be those that agree with us 100% and may be those we least expect. Justice White is a perfect example.

Continue reading "What Would Byron White Think?" AFTER THE JUMP…