Politico has learned that GOProud has joined forces with the Tea Party and written a letter addressed to both current House Minority Leader John Boehner, who is expected to be the next House Speaker, and Senate GOP leader Mitch McConnell asking for Republicans to avoid focusing on social agendas.

The gay conservative group's Executive Director as well as its Chairman of the Board, Christopher Barron, have both signed the letter along with openly lesbian talk show host Tammy Bruce and several group leaders of the national Tea Party movement.

The letter, which will be officially released tomorrow, reads in part: 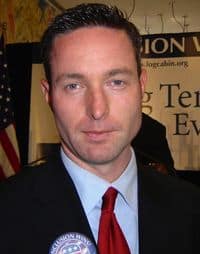 This election was not a mandate for the Republican Party, nor was it a mandate to act on any social issue, nor should it be interpreted as a political blank check.

Already, there are Washington insiders and special interest groups that hope to co-opt the Tea Party’s message and use it to push their own agenda – particularly as it relates to social issues. We are disappointed but not surprised by this development. We recognize the importance of values but believe strongly that those values should be taught by families and our houses of worship and not legislated from Washington, DC.

Politico delves into the marriage of GOProud and the Tea Party:

The alliance underscores many of the tensions and divisions in the freewheeling, leaderless tea party movement. While GOProud is ambivalent on the issue of same-sex marriage, it does openly advocate the repeal of the military's"Don't Ask Don't Tell" policy – something some of the letter's tea party signatories disagreed strongly with.

Tea Party Patriots Maine coordinator Andrew Ian Dodge said that pushing DADT repeal would be a distraction from fiscal issues like deregulation and lowering taxes and he hopes that the letter also reminds GOProud of this fact. "It is a little bit of a distraction," said Dodge about the possible repeal of DADT. "Why divide our forces?"

Ultimately, the tea party forces sympathetic to the GOProud letter said they just want to focus on fiscal issues, even if they personally hold socially conservative views.

Barron hopes to have more Tea Party signatures after the letter's official unveiling in the morning.