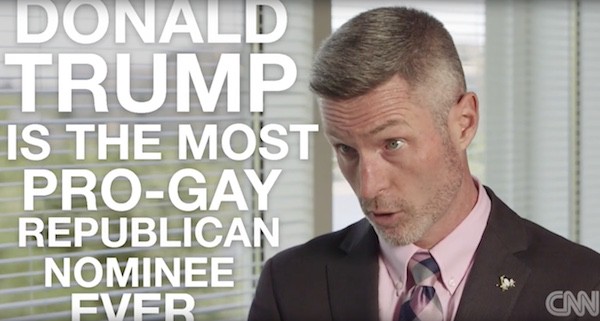 Chris Barron, the homocon founder of gay conservative group GOProud, has launched a campaign to convince LGBT people that Trump will be better for them than Hillary Clinton.

Chris Barron, the former president of the now-defunct gay conservative group GOProud, was recently a vocal Trump critic, but now is circulating a letter among like-minded members of the LGBT community, arguing that Republican Trump will better-suited to protect them from acts of extremism as president than Democrat Hillary Clinton.

“I have no doubt that Donald Trump would be better for LGBT Americans,” Barron said in an interview with CNN. “Hillary Clinton wants to continue a reckless foreign policy that has made the world less safe for all Americans, including LGBT Americans. She can find plenty of time to crucify Christians in the U.S. for perceived anti-gay bias, but when we’ve got ISIS throwing gay people off of buildings, when we have Muslim states that are prescribing the death penalty for people who are gay, I would think this would be something that a friend of the LGBT community would be able to speak out on, and Hillary Clinton finds it unable to do so.”

Barron’s career has been based around pretending (or believing) that conservatives actually like gay people.

Longtime readers may recall how Barron stood by “strong ally” Ann Coulter after she mocked National Coming Out Day with her own “disown your son” day, compared GLAAD to terrorists, and spent lots of time sucking up to Michelle Bachmann and other anti-LGBT arch-conservatives.

Don’t fall for it.

As Dan Savage noted last night on All In with Chris Hayes:

“Donald Trump has pledged to undo marriage equality. Donald Trump is the enemy of the LGBT community just as he is the enemy of the Muslim community. And beating up on what is, in the United States, a vulnerable minority group isn’t the way that you impress other members of other vulnerable minority groups to win their support.”