Chairman of the Joint Chiefs Admiral Michael Mullen is lauded in GQ's  Men of the Year issue.

Ana Marie Cox asks him about many of the issues facing the military today, including the impending repeal of "Don't Ask, Don't Tell" which he spoke out for earlier this year before the Senate. 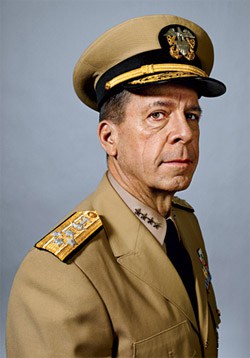 In your "Don't ask, don't tell" testimony earlier this year, you argued that the policy is a threat to morale, because it undermines the honor and integrity of soldiers. What led you to that line of thinking?

I have a very difficult time leading an organization—one of whose pillars is integrity—and asking people to lie every single day they come to work.

It is widely accepted that the army's decision to integrate pushed the culture at large closer to acceptance of civil rights. Do you think a repeal of DADT could have a similar effect?

On the issue of integration, the military led society. With respect to this issue, we're clearly not leading. There are many institutions throughout the country that have made this decision some time ago. So in terms of the direct comparison? I'd say that back then the military was in the lead, and right now I think society is in the lead.

What do you think is the biggest practical obstacle to repeal?

Actually, I don't know that at this point. There are a bunch of areas that have to be resolved: housing benefits, those kinds of things. What I'm most concerned about is whether or not a change like this would impact readiness or unit cohesion, retention, or recruiting. Those are the areas that we're focused on. I just don't know the answers yet. But if the law changes, there's no question we'll follow it. Absolutely.

Here is Mullen's statement at DADT hearings earlier this year, if you missed it.