The WaPo reports on the conclusions of the Pentagon's DADT report: 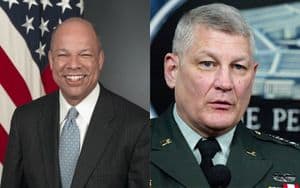 According to a survey sent to 400,000 service members, 69 percent of those responding reported that they had served with someone in their unit who they believed to be gay or lesbian. Of those who did, 92 percent stated that their unit's ability to work together was very good, good, or neither good nor poor, according to the sources.

At the same time, the report found that 30 percent of those surveyed overall — and between 40 and 60 percent of the Marine Corps — either expressed concern or predicted a negative reaction if Congress were to repeal the "don't ask, don't tell" law, which allows gays and lesbians to serve in the military on the condition that they keep their sexuality a secret.

In an exhaustive nine-month study on the effects of repealing “don’t ask, don’t tell,” the 17-year-old policy that requires gay service members to keep their sexual orientation secret or face discharge, the authors concluded that while in the short run a repeal would most likely bring about “some limited and isolated disruption to unit cohesion and retention,” it could be mitigated by effective leadership.

Johnson and Ham led a 66-person review team that met with gay rights leaders, social conservatives, military chaplains, service members discharged under the policy, the same-sex partners of closeted gay troops and gay veterans. Hundreds of thousands of troops and spouses also provided feedback through written surveys, an online dropbox and town hall meetings at bases around the world.

The lawyer and the general didn't know each other before Defense Secretary Robert M. Gates tapped them last February to study how ending "don't ask, don't tell" policy might impact troop readiness and morale.

Gates, President Obama and Joint Chiefs of Staff Chairman Adm. Mike Mullen publicly support ending it, but the final report due to them Tuesday "is by no means a piece of advocacy," Johnson said Monday in a joint interview with Ham.

"Neither one of us felt an obligation to our leadership to have this come out a certain way," Johnson said. "We both feel very strongly an obligation to report our honest and candid assessments."

Defense Department General Counsel (Johnson) and Army Gen. (Ham) will brief reporters later today. (Together with Gates and Mullen they) will testify Thursday before the Senate Armed Services Committee.

Johnson and Ham concluded that repeal could bring about some limited and isolated disruptions in the short term, but expressed confidence that the Defense Department could adjust and accommodate changes in the long term, according to the sources.

The road ahead won't be easy. Aubrey (Sarvis) noted that there is pressure from McConnell to view this as a caucus issue and to not allow anything to happen in lame duck.

One way or another, Aubrey said we need to get the repeal language done, "If there's a will, I think this can happen." Repeal advocates are keeping an eye on what other bills need to move in the lame duck as other possible vehicles for the DADT language. For example, some provisions of the Defense Authorization can be attached to the continuing resolution.

Aubrey stated that it will be much more difficult to get it done in the next Congress. Importantly, Secretary Gates recognizes that, too.

Aubrey hasn't received any indication that Secretary Gates will be actively engaging Senators in the repeal process. He did note that Gates has called upon the Senate to repeal in lame duck. Senator Collins has requested a one-on-one briefing with Gates on the report, and she will probably get that meeting — as would any other member of the Senate.

I asked Aubrey how we'll know if this is a fair process moving forward or whether the Defense bill will get caught up in procedural games. He said there have been good signs from the Majority Leader, Harry Reid. For example, Reid has committed that there will be time for McCain motion to strike the DADT language. Aubrey went on to note that we have to see that each side gets a number of amendments to call up. If it's a "real" number, Senators on both side will see that. That probably means more than five. Both the Majority Leader and key GOP Senators have "to put something on the table." Then, we can see how far apart the two sides are. Aubrey suggested that repeal advocates call the key senators and ask them: what do you think constitutes a fair process. Clearly, a "fair process" is in the eye of the beholder.