From a NYT article on Obama's visit Tuesday to Jakarta, Indonesia, where he lived as a boy from 1967 to 1971: 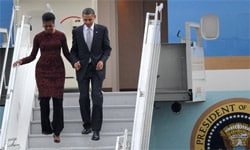 Mr. Obama’s family rented the guest house inside a compound belonging to a prominent physician. There, according to the neighborhood’s longtime residents, the young Obama, who had already experienced differences in class and religion in his short stay in Indonesia, was exposed to another aspect of Jakarta’s diversity.

His nanny was an openly gay man who, in keeping with Indonesia’s relaxed attitudes toward homosexuality, carried on an affair with a local butcher, longtime residents said. The nanny later joined a group of transvestites called Fantastic Dolls, who, like the many transvestites who remain fixtures of Jakarta’s streetscape, entertained people by dancing and playing volleyball.