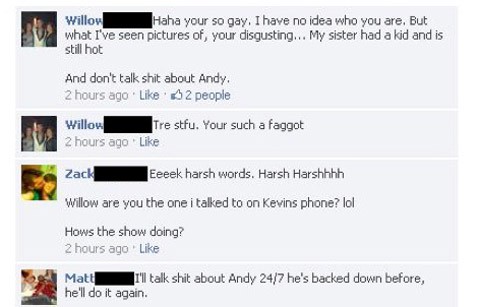 The comment sparked an intense response from Willow — who replied on the boy's wall, "Haha your so gay. I have no idea who you are, But what I've seen pictures of, your disgusting … My sister had a kid and is still hot."

Willow followed up that comment with another that read, "Tre stfu. Your such a f**got."

Bristol Palin also got in on the smacktalk — writing a message to Tre saying, "You're running your mouth just to talk sh*t."

Eventually, a message board war erupted — and Bristol took aim at another person named Jon — saying, "You'll be as successful as my baby daddy, And actually I do work my ass off. I've been a single mom for the last two years."

Previous Post: « Lawmakers: ‘DADT’ Repeal May Be Stripped from Defense Bill; Obama to Engage After Release of Pentagon Report
Next Post: Watch: Jonathan Capehart Rants Against the McCains and ‘DADT’ »