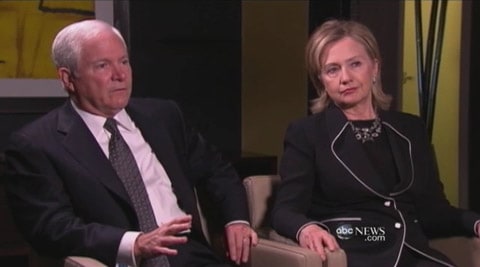 Defense Secretary Robert Gates is pushing harder for legislative repeal of "Don't Ask, Don't Tell" because he sees it as a matter of the military having control over its implementation, or the courts.

"I would say that the leaving 'don't ask, don't tell' behind us is inevitable. The question is whether it is done by legislation that allows us to do it in a thoughtful and careful way, or whether it is struck down by the courts. Because recent court decisions are certainly pointing in that direction. And we went through a period of two weeks in October where we had four different policy changes in the space of, as I say, two weeks, from striking it down totally, to a stay, to appeal, and so on. So I I think we have the least flexibility. We have the least opportunity to do this intelligently and carefully and with the kind of preparation that is necessary, if the courts take this action as opposed to there being legislation…

…My hope frankly is that if they — if we can make the case that having this struck down by the courts is the worst outcome, because it gives us no flexibility, that people will think I'm called a realist, a pragmatist, I'm looking at this realistically. This thing is gonna go one way or the other. And I wanted and I — when I testified last February I said, you know, there's smart ways to do things and there's stupid ways to do things. And trying to do this all at once and under some kind of fiat, I think is not the way to do it."

Clinton's whole answer, which was edited in the following clip, was:

"Well I — Let me answer first, because Bob, of course, has the responsibility of carrying out the policy that is in existence and any policy that might come into existence, and say that I certainly hope so. I think again it's kind of a generational issue, and this issue, like so many issues, you know young people have different life experiences. But there does have to be a thoughtful process, which is what Bob's running right now, a process to really survey this and examine and analyze it, and come to what is the best decision for our military and what they're expected to do out in very dangerous and difficult situations."

Watch an edited clip of their interview, AFTER THE JUMP…