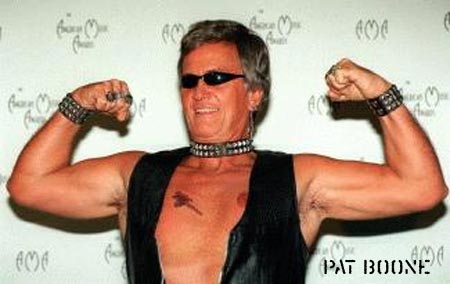 Pat Boone is selling his meat, which is a scary enough headline.

He's getting into the celebrity-endorsed food business, launching a line of so-called "All-American" meats to benefit conservative Christian organizations and causes like Mercy Corps and Focus on the Family.

Boone, who we last covered after he recorded anti-gay robo-calls for Kentucky gubernatorial candidate Steve Beshear. Boone has also compared gay activists to terrorists, before insisting he loves gays.

Boone has recently been active in the Tea Party, so, perhaps Sarah Palin can do the butchering for him.

Listen to NPR's report, AFTER THE JUMP…