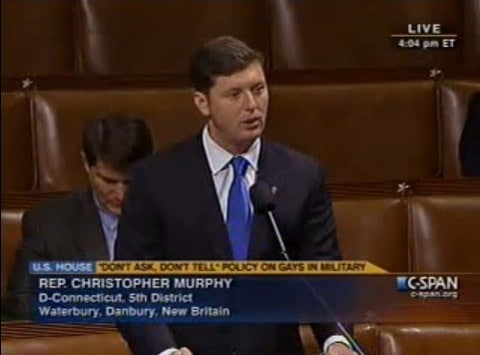 The House late this afternoon passed a bill approving repeal of the military's "Don't Ask, Don't Tell" policy by a vote of 250-175, with 15 Republicans joining 235 Democrats to say "yes" to the measure.

The measure now goes to the Senate.

Watch Reps. Patrick Murphy, Tammy Baldwin, Barney Frank, and Joe Sestak speak for the bill during debate, AFTER THE JUMP…

I applaud the House for passing, with bipartisan support, the Don't Ask, Don't Tell Repeal Act of 2010.  Legislative repeal is supported by the Secretary of Defense and the Chairman of the Joint Chiefs of Staff.  The process contained in this legislation allows for a smooth and responsible repeal of “Don’t Ask, Don’t Tell” in a way that maintains good order and discipline in our military ranks.   Indeed, all of the Service Chiefs have said that when this law is changed , they will implement an orderly transition effectively and efficiently.  As the comprehensive study by the Department of Defense clearly shows, we can move to a new policy in a responsible manner that ensures our military strength and our national security.

I particularly want to thank Speaker Nancy Pelosi, Majority Leader Steny Hoyer, and Congressman Patrick Murphy for their leadership on this issue.  I have consistently called for the repeal of this law.  Moving forward with the repeal is not only the right thing to do, it will also give our military the clarity and certainty it deserves.  We must ensure that Americans who are willing to risk their lives for their country are treated fairly and equally by their country.