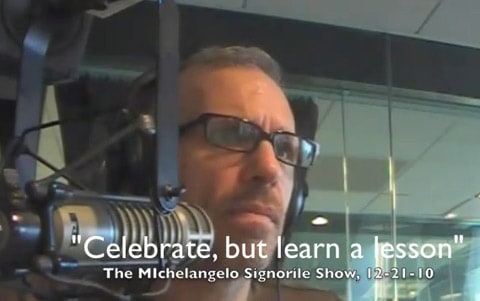 Radio host Michelangelo Signorile discussed Obama's victory on 'DADT' repeal this week, and why a lot of other folks deserve the credit too.

Writes Signorile on his blog:

"In the end, through a series of fateful events — from Harry Reid pulling the government spending bill, clearing the schedule, to Senators Lieberman and Collins creating a stand-alone bill — "don't ask, don't tell" repeal passed. In addition to fate and timing, it was because DADT repeal took on a life of it's own thanks to activists' relentless pressure, disrupting the president's events, protesting Congressional leaders. It's not a coincidence that other promises made by the president, where there was much less pressure from the left early on, didn't pan out. And that's the lesson of the DADT repeal saga for the LGBT movement and for all progressives."