Hopes for 'DADT' repeal hit a new low this morning following Harry Reid's announcement of scheduling for the next two weeks in the Senate, in which the Defense Bill, is, at best, an afterthought, at worst, completely dead.

It's nowhere to be seen on the Senate schedule. 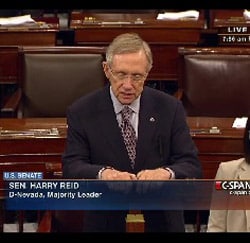 In the video (via americablog), after the jump, Reid lays out the schedule for now until December 17th, when the Senate adjourns. In it, there's no mention of the Defense bill, or DADT repeal. Finally, he is prodded by a colleague to say something on the Defense bill.

Meanwhile, GOP Senators are laying out new "bogus" and "arbitrary benchmarks for how long it might take to debate the Defense bill.

And would Reid extend the session into Christmas break to debate the NDAA and DADT?

Also, Kerry Eleveld has a thorough piece on where we stand at the moment. It's not good.