Isn't this a warm hello from the Governor-Elect Robert Bentley of Alabama? 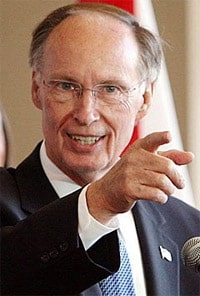 Bentley told a big crowd at Dexter Avenue King Memorial Baptist Church, where the late civil rights leader Rev. Martin Luther King Jr. once was pastor, that he believed it was important for Alabamians ''that we love and care for each other."

''I was elected as a Republican candidate. But once I became governor … I became the governor of all the people. I intend to live up to that. I am color blind," Bentley said in a short speech given about an hour after he took the oath of office as governor.

Then Bentley, who for years has been a deacon at First Baptist Church in Tuscaloosa, gave what sounded like an altar call.

Bentley added, ''Now I will have to say that, if we don't have the same daddy, we're not brothers and sisters. So anybody here today who has not accepted Jesus Christ as their savior, I'm telling you, you're not my brother and you're not my sister, and I want to be your brother."

Said Bentley later: ''We're not trying to insult anybody."

Previous Post: « Schwarzenegger’s Mom Took Him to the Doctor Because She Thought He Was Gay
Next Post: Watch: ‘A Wrinkle in Time’ in 90 Seconds »