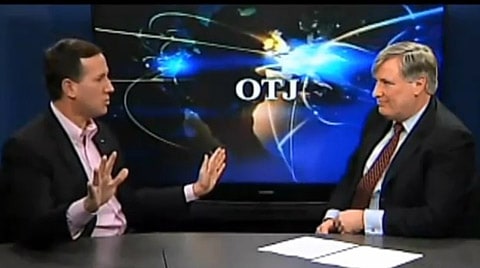 Here's the other gem of a moment from Rick Santorum's interview (I posted you the anti-gay moment yesterday) with CNS News in which Santorum expresses his dismay that Barack Obama won't oppose abortion because, according to Santorum's logic, Blacks and fetuses have faced similar persecution under the Constitution because at some point both have not been recognized as persons.

Said Santorum: "The question is, and this is what Barack Obama didn't want to answer, is that human life a person under the Constitution? And Barack Obama says no. Well if that person — human life — is not a person, then, I find it almost remarkable for a black man to say, 'we're going to decide who are people and who are not people.'"