Defense Secretary Robert Gates wants a plan no later than one week from today for accomplishing implementation of 'DADT' repeal, according to a memo released in conjunction with a news conference at the Pentagon. 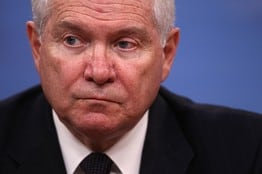 In a five-page memorandum dated Jan. 28 and obtained by the Blade, Gates tasks Under Secretary of Defense for Personnel & Readiness Clifford Stanley with devising a strategy to “facilitate the timely and orderly realization” of “Don’t Ask, Don’t Tell” repeal by next Friday.

Gates emphasizes that open service will be implemented throughout the services at the same time, squelching concerns about whether repeal would happen in the military in a graduated process.

“This is not, however, a change that should be done incrementally,” Gates writes. “The steps leading to certification and the actual repeal must be accomplished across the entire Department at the same time, and consistent with the standards of military readiness, military effectiveness, unit cohesion, and recruiting and retention of the Armed Forces.”

Each of the military services will be responsible for the specifics of training commanders, chaplains and troops. They will emphasize training troops before they deploy, but some training may take place on the battlefront, officials said.

"Moving along expeditiously is better than dragging it out," Vice Chairman of the Joint Chiefs of Staff Gen. James E. Cartwright said Friday in a briefing with reporters.

The training is likely to be led by instructors, but may include written materials, videos, vignettes describing different elements of military life, and PowerPoint slides outlining changes in policy. Each individual will need to be certified as having have completed the training, Cartwright said.

"Servicemembers Legal Defense Network is pleased the Pentagon is taking thoughtful steps to move toward certification and implementation of open service. SLDN continues to believe open service can be achieved sooner rather than later. I agree with General Cartwright that all of the troops, from top to bottom, do not need to undergo a comprehensive training and educational program before there is certification. The training and education plan need only be in place. The fact is education and training around open service can be accomplished in the first and second quarter of this year. In addition, much of the training can continue to take place during the 60-day period following certification."

Read (via the Washington Blade) Gates' memo, AFTER THE JUMP…