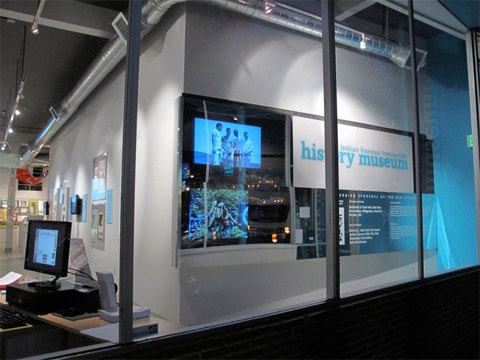 The GLBT History Museum, a 1600 sq ft. facility housing archives from the GLBT Historical Society, is now open at 4127 18th Street in San Francisco's Castro district. The grand opening is next week, on January 13, from 7-9 pm, and is open to the public.

Following are a few images from within the museum, and some info about its origins and support. 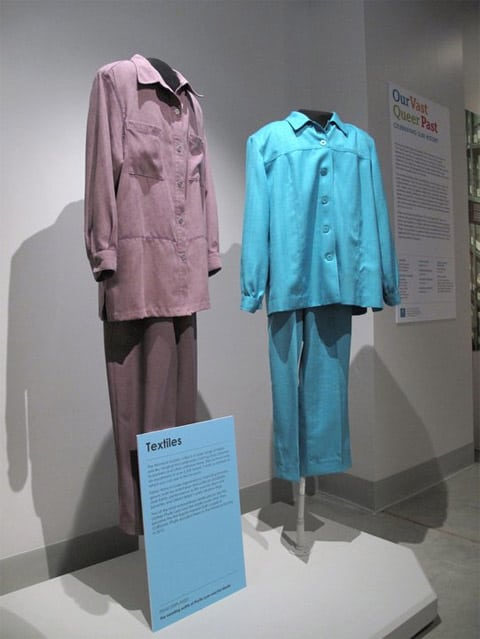 The "Textiles" section of "Great Collections" features the pantsuits worn by lesbian pioneers Del Martin and Phyllis Lyon when they became the first same-sex couple to wed during San Francisco's "Winter of Love" in 2004 and again when California briefly legalized such marriages in 2008. A couple for more than half a century, Del and Phyllis were cofounders of the Daughters of Bilitis, established in 1955 as the first lesbian organization in the United States.

Said Paul Boneberg, executive director of the Historical Society, in a statement to press.: "A quarter century after the founding of the GLBT Historical Society, we're proud to open a museum to showcase our community's history. The GLBT History Museum is in the heart of the Castro, a neighborhood visited not only by locals, but also by tens of thousands of tourists every year who come in search of queer culture. At our museum, they'll discover treasures from our archives that recount the diverse and fascinating stories of our lives. We have gone all out to create a museum as rich, diverse and surprising as the GLBT community itself. Whether they are gay, lesbian, bisexual, transgender or straight, visitors are sure to be moved, enlightened and entertained." 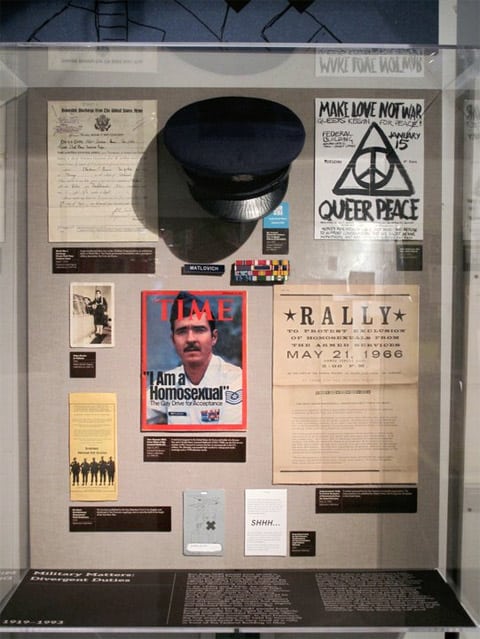 "Military Matters: Divergent Duties" in "Our Vast Queer Past" focuses on both GLBT demands for equality in military service and GLBT opposition to war and militarism. The document at upper left is the 1919 honorable discharge of gay novelist and short-story writer Clarkson Crane, who served in the U.S. Army medical corps in combat in France in World War I. It's one of the oldest items on display in the exhibition.

The museum will feature two debut exhibitions: In the main gallery, "Our Vast Queer Past: Celebrating GLBT History," curated by historians Gerard Koskovich, Don Romesberg and Amy Sueyoshi; and in the front gallery, "Great Collections of the GLBT Historical Society Archives." 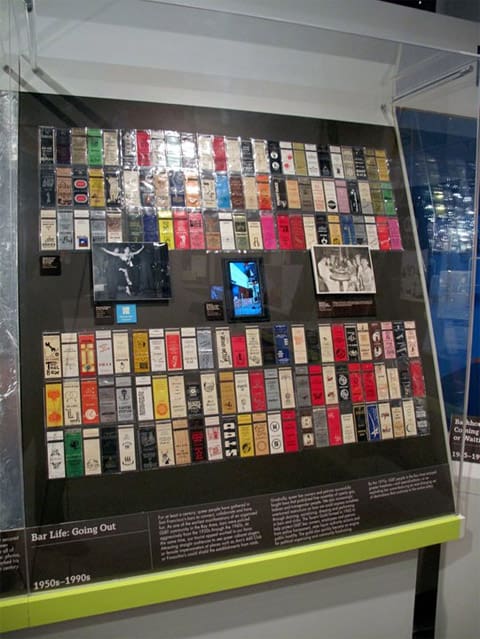 "Bar Life: Going Out" section of "Our Vast Queer Past." The display includes 120 different matchbooks from San Francisco and Bay Area GLBT bars and clubs (1950s-1990s). The screen in the center shows more than 100 slides of façades of San Francisco LGBT bars (1968-1973) taken by Henri Leleu.

Funding for the museum has come from Levi's, the City of San Francisco, Castro district merchants, and numerous other sponsors and individual donors.

You can check out a whole gallery of these photos HERE (if you're on Facebook).