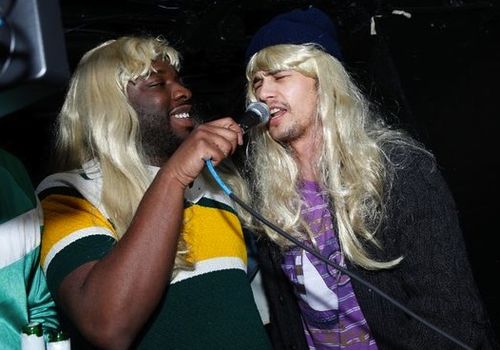 James "maybe I'm just gay" Franco rarely involves himself in unimaginative and dull projects. His latest artistic endeavor, which debuted at the Sundance Film Festival last night, held true to that type of consistency and, in celebration, Franco donned a blond wig and belted out a few tunes.

So what exactly is the project? It's an imaginative art installation that recreates an episode of Three's Company. NY Magazine helps fill in the holes: 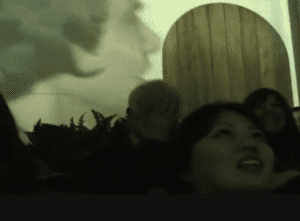 As a director and artist, Franco was in Park City for the unveiling of Three's Company: The Drama, a sitcom-deconstruction-cum-multimedia-installation in the Sundance Film Festival's New Frontier section. With the help of some friends donning cheap wigs, Franco recreated an episode of Three's Company sans laugh track (and with the sex jokes and desperation amped up), then projected that footage on all four walls of a small room filled with wicker furniture that itself recreated the sitcom's main apartment set. As weird as that was, though, it couldn't compare to when Franco put on a blond Suzanne Somers wig at the installation's after-party (modeled after the sitcom's hangout, the Regal Beagle, of course) and began to sing.

In the crowded room, as celebrities like Eliza Dushku, Rick Fox, and original Three's Company alum Richard "Larry Dallas" Kline looked on, Franco and performance artist Kalup Linzy (also wigging out) belted out "Chewing Gum," a song from their arty band Kalup and Franco with lyrics like "This ain't no chewing gum" and "You're just a fuck, you hot mess." Franco also sang the Three's Company theme song during his art exhibit.

I, for one, can't wait to see it. Watch a short clip of the screening from last night, AFTER THE JUMP.