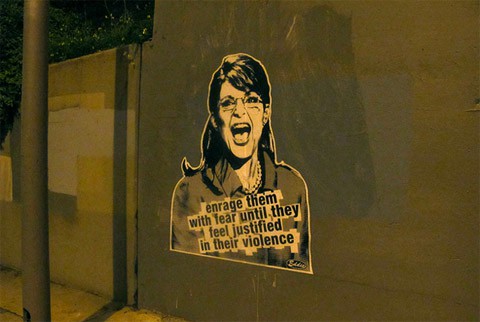 "An executive at Fox News Channel said that Ms. Palin would appear on the program of the conservative host Sean Hannity, and that the interview was scheduled to run through several commercial breaks. The announcement came on Thursday, another day when Ms. Palin was figuring prominently in the discussion surrounding the Tucson shooting rampage, for her video statement about the shootings that she released Wednesday morning to stinging reviews from liberals and even some Republicans.

Ms. Palin is a paid Fox contributor, but she has been laying low on the network in the wake of the shooting. Her agreement to sit for an interview comes as even some Republicans have urged her to put herself out there for questions amid the criticism she is facing."

And she'll also speak in front of a gun club later this month.

Also, watch Palin delete the comments on her Facebook page in real time.

The poster up top is one that has popped up in San Francisco, by street artist Eddie Colla.

Previous Post: « Watch: Rachel Maddow Does Not Accept Being a Pisces
Next Post: Dave and James Franco to Star in Feature Film, About Themselves »