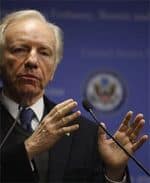 "Lieberman's office did not offer any comment on his plans, saying only that he would make an announcement tomorrow in Stamford, Connecticut. 'The Senator's remarks tomorrow will stand on their own,' said a Lieberman spokeswoman…With Lieberman out, the focus will turn to a very tightly contested Democratic primary between Secretary of State Susan Bysiewicz and Rep. Chris Murphy. Bysiewicz announced her candidacy Tuesday while Murphy was expected to formally enter the race within days. Rep. Joe Courtney has also said he is considering a candidacy."