The ever-evolving Ted Haggard, who previously admitted to buying meth but said he threw it away and in January of last year called himself a "heterosexual with issues", lets GQ writer Kevin Roose in on a few details in a new profile: 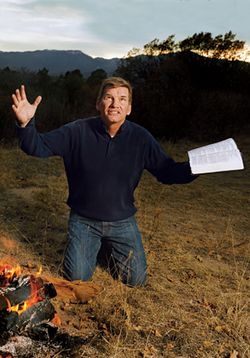 When Gayle leaves to pick up lunch from a nearby Italian joint, I mention that I visited Mike Jones in Denver. Ted tenses and preemptively begins debunking Jones's claims again—no sex, no repeat massages, no kinky stuff. He admits that he bought drugs from Jones "five or six times" but maintains that he wasn't an addict.

He's also not a heterosexual with issues:

"Here's where I really am on this issue," he half whispers. "I think that probably, if I were 21 in this society, I would identify myself as a bisexual." After a weekend of Ted trying to convince me of his unambiguous devotion to his wife and kids, I'm at first too surprised to say anything.

"Because, Kevin, I'm 54, with children, with a belief system, and I can have enforced boundaries in my life. Just like you're a heterosexual but you don't have sex with every woman that you're attracted to, so I can be who I am and exclusively have sex with my wife and be perfectly satisfied."

The Last Temptation of Ted [GQ]